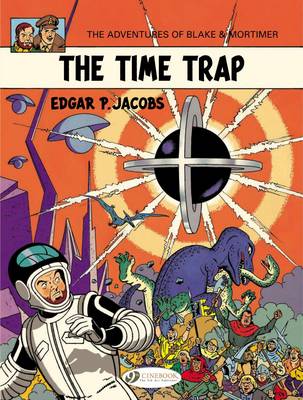 Reviews
Great for age 3-6 years
An enemy's vengeance from the grave traps Mortimer out of time. Professor Mortimer is bequeathed an old house in France by a former adversary: Miloch, the evil genius of SOS Meteors fame. Along with the house is a letter inviting the Briton, as the only man of worthy intellect, to discover a fabulous invention left behind by the departed. Following recorded instructions, Mortimer activates the device ...and wakes up a hundred million years in the past! Thus begins an incredible odyssey through time...Captain Francis Blake, dashing head of England's MI5. Professor Philip Mortimer, world-renowned nuclear physicist. The most distinguished duo of gentleman-adventurers, battling the forces of evil and their arch nemesis Olrik around the globe, below the earth, even across time itself...The 19th adventure of Her Majesty's finest protectors!

This is volume 19 in Blake And Mortimer .

There are 72 pages in this book. This is a picture book. A picture book uses pictures and text to tell the story. The number of words varies from zero ('wordless') to around 1k over 32 pages. Picture books are typically aimed at young readers (age 3-6) but can also be aimed at older children (7+). This book was published 2014 by Cinebook Ltd .

Created by Edgar Pierre Jacobs after WWII, Professor Philip Mortimer, nuclear physicist, and Captain Francis Blake, dashing head of MI5, are legendary heroes of the 9th art. The author, a close friend of Herge, took part in the visual realisation of Tintin in the Congo, Tintin in America, The Blue Lotus, King Ottokar's Sceptre, The Seven Crystal Balls, and Prisoners of the Sun.