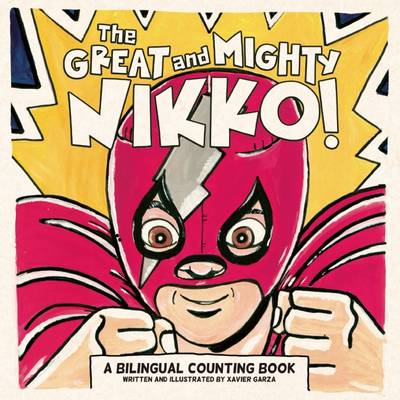 The Great and Mighty Nikko

Reviews
Great for age 3-10 years
Nikko loves bedtime. That's because his bed turns into a magical wrestling ring for the masked luchadores that he loves. They bounce up and down like crazy. His mom, of course, doesn't believe Nikko. She accuses him of jumping on his bed. But that's just not true at all. She just can't see what Nikko sees. And to prove his point-zoosh! Here comes luchador numero UNO with a golden mask and a silver cape. Oh, wow. Number TWO wears an orange mask with yellow flames. Another looks like a jaguar and he growls! A rooster! A bull with horns! And a dragon that breathes fire! And so it goes until TEN luchadores are jumping on Nikko's bed. That's when the Great and Mighty Nikko puts on his mask, taking on all ten wrestlers at once and defeating them soundly. Ahh, a fresh victory under his belt, now it's time for Mighty Nikko to catch some zzzzzs! Artist and storyteller Xavier Garza is celebrated for his lucha libre picture books and chapter books. Maxmillian and the Mystery of the Guardian Angel was a Pura Belpre Honor Book, 2012, and a ALA Notable Book, 2012. Xavier, who is a much requested storyteller for schools, has been a featured speaker at the American Library Association (REFORMA), the Tucson Book Festival, and the Texas Library Association.

This book was recognised in the Best Children's Picture Books for Summer Reading category by the La Times Book Award.

This book has been graded for interest at 3-7 years.

There are 32 pages in this book. This is a picture book. A picture book uses pictures and text to tell the story. The number of words varies from zero ('wordless') to around 1k over 32 pages. Picture books are typically aimed at young readers (age 3-6) but can also be aimed at older children (7+). This book was published 2015 by Cinco Puntos Press, U. S. .

Xavier Garza was born in the Rio Grande Valley of Texas. He is an enthusiastic author, artist, teacher, and storyteller whose work is a lively documentation of the dreams, superstitions, and heroes in the bigger-than-life world of south Texas. Garza has exhibited his art and performed his stories in venues throughout Texas, Arizona, and the state of Washington. He lives with his wife and son in San Antonio, Texas.