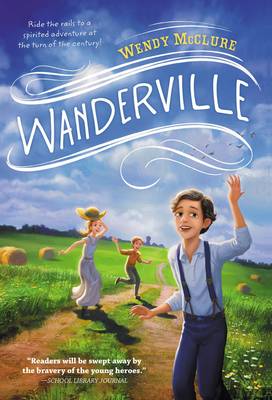 Reviews
Great for age 8-13 years
Jack, Frances, and Frances' younger brother Harold have been ripped from the world they knew in New York and sent to Kansas on an orphan train. As the train heads to its destination, awful rumours of what life is actually like where they're going begin to pile up. And so they decide to change their fate the only way they can - they jump off the train. They wander into the woods and meet a boy who will change their lives forever. His name is Alexander, and he tells them they've come to a place nobody knows about - especially not adults-and where "all children in need of freedom" are accepted. It's a place called "Wanderville," Alexander says, and Jack, Frances, and Harold are its very first citizens.

This book is part of a book series called Wanderville .

There are 224 pages in this book. This book was published 2014 by Razorbill .

Wendy McClure (WendyMcClure. net) is the author of The Wilder Life: My Adventures in the Lost World of Little House on the Prairie and several other books for adults and children. She is a senior editor at Albert Whitman and Company, where her recent projects include books in the Boxcar Children series. She received an MFA from the Iowa Writer's Workshop and has been a contributor to the New York Times Magazine and This American Life . She lives in Chicago with her husband.

Orphans And Foster Homes in fiction