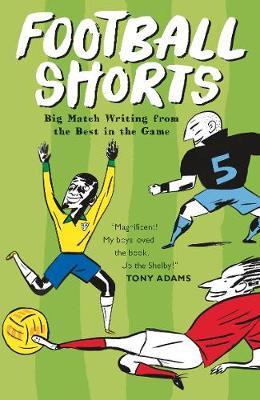 Reviews
Great for age 9-12 years
Big match writing from the best in the game... Billy's telling tall stories about his "famous" grandfather, Raphael suspects his coach of murder, Tom and Jerry surprise a talent scout and Katy gets picked to play for England. It's all going on at Shelby Town! A collection of short stories and poems about football, by a fantastic line-up of children's authors, football writers and players.

There are 240 pages in this book. This is a short story book. This book was published 2014 by Walker Books Ltd .

Tom Watt is probably best known as Lofty from EastEnders, a role he played for three years in the 1980s. Since then he has appeared in West End hits, national tours and films that include Patriot Games, Sherlock Holmes and Small Island. Tom now primarily writes and broadcasts about football and has written extensively for The Observer, The Times, The Daily Mail, The Evening Standard and The Sportsman as well as fronting a weekly phone-in show for Arsenal TV and participating regularly in Radio 5's Fighting Talk. Most recently he wrote A Beautiful Game: Football Through the Eyes of the World's Greatest Players and ghostwrote David Beckham's million-selling autobiography My Side as well as devising a football-based literary and numeracy resource for schools entitled The Jags. Tom lives with his wife and son in Gloucestershire.