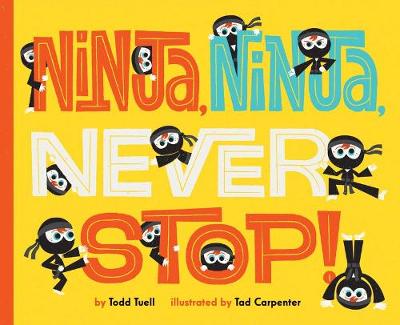 Reviews
Great for age 3-6 years
Ninja small, Ninja large Ninja duck, Ninja charge. Ninja run, Ninja chop Ninja, Ninja never stop! Follow this little ninja as he sneaks up on the family dog, swipes a cookie from his brother and escapes from Granny's kiss... only to be eventually out-ninjaed by his younger brother's sneak-attack! With fast-paced rhymes that parallel the little ninja's quick moves, this humorous ode to stalking, sneaking, spying and scheming is sure to be read over and over again. Tad Carpenter's bright, action-packed illustrations will inspire imaginary play for a new generation of ninjas.

There are 32 pages in this book. This is a picture book. A picture book uses pictures and text to tell the story. The number of words varies from zero ('wordless') to around 1k over 32 pages. Picture books are typically aimed at young readers (age 3-6) but can also be aimed at older children (7+). This book was published 2014 by Abrams .

Todd Tuell is a writer and a father of three. He serves as co-Regional Advisor to the Rocky Mountain Chapter of the Society of Children's Book Writers & Illustrators. Tad Carpenter is a commercial illustrator and designer, whose work has appeared in stores, advertisements, greeting cards, and books. He has worked with clients such as Target, Atlantic Records, Hallmark Cards and Family Circle.