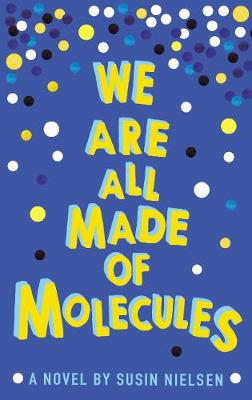 We Are All Made of Molecules

Reviews
Great for age 12-18 years
Meet Stewart. He's geeky, gifted and sees things a bit differently to most people. His mum has died and he misses her all the more now he and Dad have moved in with Ashley and her mum. Meet Ashley. She's popular, cool and sees things very differently to her new family. Her dad has come out and moved out - but not far enough. And now she has to live with a freakazoid step-brother. Stewart can't quite fit in at his new school, and Ashley can't quite get used to her totally awkward home, which is now filled with some rather questionable decor. And things are about to get a whole lot more mixed up when these two very different people attract the attention of school hunk Jared. . .

There are 336 pages in this book. This book was published 2016 by Andersen Press Ltd .

Susin Nielsen got her start writing for popular television series, Degrassi Junior High. Since then, she's written for many Canadian TV shows and her young adult novels have received considerable critical acclaim. Word Nerd and My Messed-Up Life won multiple Young Readers' Choice Awards. The Reluctant Journal of Henry K. Larsen won the UKLA Award, the prestigious Governor General's Literary Award, the Canadian Library Association's Children's Book of the Year and many Young Readers' Choice Awards, while We Are All Made of Molecules was longlisted for the Carnegie Medal. Susin lives in Vancouver with her family and two extremely destructive cats.