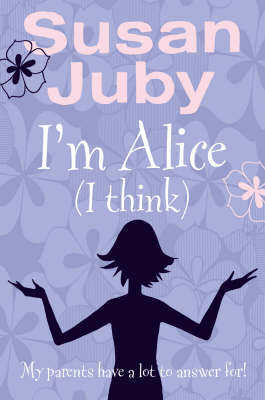 The hilarious diary of Alice and her attempts to survive the embarrassments that are her parents, the small-minded nature of her hometown, and her own struggle to fit in. Highly observant, satirical and wise.

Fifteen years old and nursing a "serious case of outcastitis," Alice MacLeod is having a hard time finding anything much to like in small town Smithers, British Columbia. Her mum's a folk-festival hippie chick with a hair-trigger temper, her dad's a mild and reasonable sort of loser who hides out in the basement trying to write soft-core romance novels, and her last school counsellor threw a teary fit in the middle of a session and left the profession entirely. She'd love to "get past what my father calls my 'knee-jerk dislike of just about anything,'" but she's not sure that there's anything out there that's worth it.
Alice's journal is filled with eye-rolling protests at the embarrassments and stupidities she finds herself surrounded with: her mother's drumming-circle friends, the therapeutic jargon thrown her way by counsellors and the outstanding inefficacity of her current counsellor, Death Lord Bob. But Alice's sharp bark doesn't do much to conceal her lack of a bite. It's her mum, after all, not Alice, who gets into a fistfight with Linda, the town's teen thug, while Alice sits cringing in the family car. In fact, Alice has a sweet side, which she makes all the more endearing by getting all squirmy and ashamed whenever she reveals it. Alice's fierce ungainliness, and her unwillingness to surrender it to make her life any easier, make her struggles highly appealing.

There are 256 pages in this book. This book was published 2005 by HarperCollins Publishers .

Susan Juby dropped out of fashion design college at a young age, and after obtaining a BA at the University of British Columbia, went to work in publishing. She now has a master's degree in publishing and has just completed the third novel in the Alice series, which has become a hit in Canada, the US and Australia. Susan has survived life in several small towns in BC, and now lives on Vancouver Island with her husband, James and their dog, who prefers to remain anonymous.