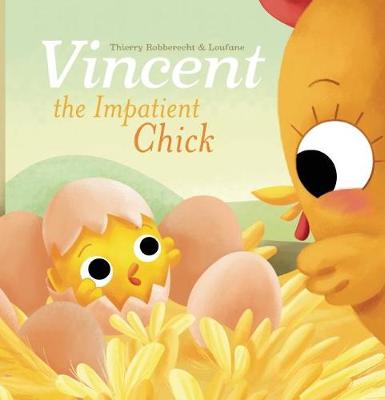 Reviews
Even before he was born, Vincent was a restless chick. He left the egg faster than his brothers and sisters. Now he wants to be the first one to eat worms, to roost with the chickens and walk to school through the woods. A fox makes Vincent more careful, but he'll probably never be quiet and patient ...A mother hen has a lot of patience with her busy chick in this playful, humorous story for children aged 4 and up.

There are 32 pages in this book. This book was published 2016 by Clavis Publishing .

Thierry Robberecht has written numerous novels for youth and children's picture books. He lives in Brussels, Belgium. Thierry Robberecht (1960) has two children and lives in Brussels (Belgium). He has been writing children's books since fifteen years now, often about subjects that children find difficult to talk about, e. g. secrets, death, envy and rage. He likes to create characters who feel like they don't fit in. Loufane's real name is Stephanie Frippiat. She was born in 1976 and grew up in Aarlen (Belgium). For years she fantasized about making a big journey. Now that dream has become true: she now lives in Saint-Nicolas (Canada) with her boyfriend.