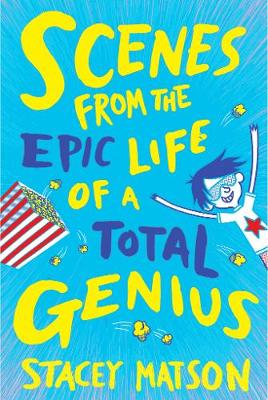 Scenes From the Epic Life of a Total Genius

Reviews
It's a new year for Arthur Bean which means new goals. He plans to have his own column in the school newspaper, save the environment, and write and direct an award-winning zombie film. All the while, he is going to be totally hilarious and devastatingly cool (in a geeky way). But sometimes Arthur's ambitions go a little too far... Arthur's genius and potentially award-winning thoughts and schemes are brought to life through emails, notes, doodles and texts. With inside illustrations by Simon Kwan

There are 272 pages in this book. This book was published 2016 by Andersen Press Ltd .

Stacey Matson is from Calgary. She began her career in theatre, writing pieces for museums. She's had lots of jobs, including belly dancer, forklift driver, children's party entertainer and Christmas tree seller. She loves travel, tennis and skiing, and plays the piano and ukulele. She now lives in Vancouver.