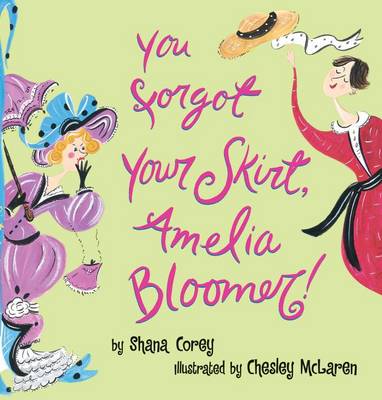 You Forgot Your Skirt, Amelia Bloomer

This book was published 2000 by Scholastic Press .

Shana Corey has the unique ability to make history accessible and fun, a talent that has been praised in all of her celebrated picture books, including MERMAID QUEEN, illustrated by Edwin Fotheringham and YOU FORGOT YOUR SKIRT, AMELIA BLOOMER!, illustrated by Chesley McLaren, which was named a Publishers Weekly Best Book of the Year and an Orbis Pictus Recommended Title. She lives in Brooklyn, New York. Edwin Fotheringham has illustrated several notable picture books, including Barbara Kerley's WHAT TO DO ABOUT ALICE?, a Sibert Honor Book and a Boston Globe/Horn Book Award Honor Book, and THE EXTRAORDINARY MARK TWAIN (ACCORDING TO SUSY), a New York Public Library Best Children's Book. Edwin lives in Seattle, Washington. You can visit him online at www. edfotheringham. com.