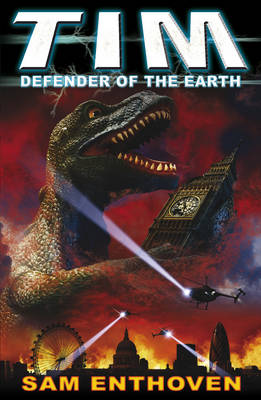 TIM Defender of the Earth

Reviews
Great for age 9-18 years
TIM is Tyrannosaurus Improved Model. He's a genetically modified dinosaur that the government have been growing in a secret bunker under Trafalgar Square. And he's on the loose, after the Prime Minister decides he's just too expensive to keep. He's huge and clumsy, and with just a few steps could crush much of central London. He tries to get away but something's calling him back... Professor Mallahide is very very clever. But also slightly crazy. He's developed an amazing new invention, where nanotechnology means that objects and even people can be taken apart, remodelled, changed and used for any purpose. It's an incredible tool - but also could be a very dangerous weapon in the wrong hands. Unfortunately it's in the hands of a mad scientist... Chris and Anna are caught up in something very big and scary. Can these two kids help at all as TIM and Professor Mallahide do battle? A spectacular novel of goodies and baddies fighting it out in London, using Big Ben as a spear and throwing themselves into Buckingham Palace. Hilarious, wild and utterly original.

There are 304 pages in this book. This book was published 2014 by Random House Children's Publishers UK .

For ten years Sam Enthoven worked in a big London bookshop on Charing Cross Road. His first book, The Black Tattoo, was published in 2006. His follow- up to The Black Tattoo (but not a sequel), Tim, Defender of the Earth is, as he modestly puts it, "Phase Two of my sinister masterplan to conquer the universe!" He is committed to writing books that make young people want to read. He lives in Hackney, London.