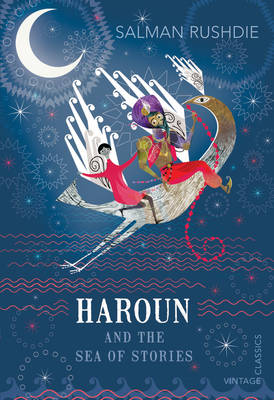 Reviews
Great for age 12-18 years
Haroun: What's the use of stories that aren't even true? I asked that question and the Unthinkable Thing happened: my father can't tell stories anymore. That means no more laughter in the city of Alifbay and now the place stinks of sadness. So it's up to me to put things right. If the water genie Iff can take me on the Hoopoe bird Butt all the way to Gup City then maybe, just maybe, I'll be able to persuade the Grand Comptroller to give my father his Story Water supply back. Trouble is, that is strictly forbidden, one hundred percent banned, no way Jose territory... Luka: What do sea monsters eat? The Old Man of the River of Time: Fish and Ships. Why was six afraid of seven? Luka: Because seven eight nine. Luckily, my father is the Riddle King and taught me everything I know. But the stakes are high in this riddle battle, couldn't be higher in fact! To save my father from Un-Life, I've got to beat the Old Man and steal the Fire of Life that burns at the top of the Mountain of Knowledge. Only problem is that nobody in the entire recorded history of the World of Magic has ever successfully stolen the Fire of Life... Includes exclusive material: In the Backstory you can read an interview with the author and solve some fiendish riddles! Vintage Children's Classics is a twenty-first century classics list aimed at 8-12 year olds and the adults in their lives. Discover timeless favourites from The Jungle Book and Alice's Adventures in Wonderland to modern classics such as The Boy in the Striped Pyjamas and The Curious Incident of the Dog in the Night-Time.

There are 496 pages in this book. This book was published 2013 by Vintage Publishing .

Salman Rushdie was born in Bombay in 1947. He is the author of many adult novels including the Booker winning Midnight's Children. He wrote Haroun and Luka for his sons, Zarfar and Milan.