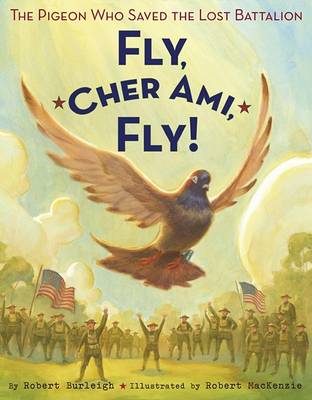 Reviews
Great for age 3-6 years
"Fly, Cher Ami, Fly!" is the riveting story of a famous carrier pigeon during World War I who saved the lives of over 200 American soldiers. Cher Ami flew 25 miles in 25 minutes to deliver a message explaining where American soldiers were trapped so that they could be rescued from the Germans. The pigeon was hailed a hero of the 77th infantry division, received the French Croix de Guerre, he even received a prosthetic leg after he was injured, and is preserved in the Smithsonian. Robert McKenzie is an up-and-coming illustrator who brings this dramatic story to life.

There are 28 pages in this book. This is a picture book. A picture book uses pictures and text to tell the story. The number of words varies from zero ('wordless') to around 1k over 32 pages. Picture books are typically aimed at young readers (age 3-6) but can also be aimed at older children (7+). This book was published 2008 by Abrams .

Robert Burleigh has written many acclaimed books for children, including Seurat and la Grande Jatte: Connecting the Dots and Chocolate: Riches fromthe Rainforest. John Cech writes plays, poetry and fiction for both children and adults and is a Professor of English at the University of Florida in Gainesville. Robert MacKenzie has worked as a Concept, Visual Development and Colour Key artist at Lucasfilm, PDI Dreamworks and Blue Sky Studios.