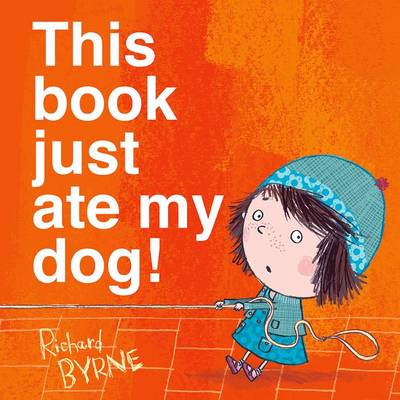 This Book Just Ate My Dog!

Reviews
Great for age 3-8 years
In this wonderfully inventive book, Bella is taking her dog for a stroll across the page but halfway across, he disappears! Unable to quite believe what's just happened Bella watches, transfixed, with changing emotions of surprise, indignation, moments of renewed hope (as the authorities arrive to take control) followed by shock (as they too succumb to the book's inexplicable behaviour) and finally action when Bella marches toward the dangerous middle of the book . . . only to disappear herself! At this point, the book has consumed its characters and it's down to the reader to step in to help. A note from Bella appears directly appealing for assistance and, with a rigorous shake, the characters reappear. Normality is restored and Bella is finally able to take her dog for an uninterrupted walk . . . or is she?!

This book was recognised in the Books for Younger Readers category by the Fcbg Book Award.

There are 32 pages in this book. This is a picture book. A picture book uses pictures and text to tell the story. The number of words varies from zero ('wordless') to around 1k over 32 pages. Picture books are typically aimed at young readers (age 3-6) but can also be aimed at older children (7+). This book was published 2015 by Oxford University Press .

Richard Byrne was born and grew up in Brighton. He studied at Eastbourne College of Art & Design. New to the picture book world Richard is an up and coming picture book creator with his first two books being nominated for the Kate Greenaway Medal 2012. In 2013 he won the Oxfordshire Book Award for The Really, Really, Really Big Dinosaur. He lives in Chichester with his wife and two children.