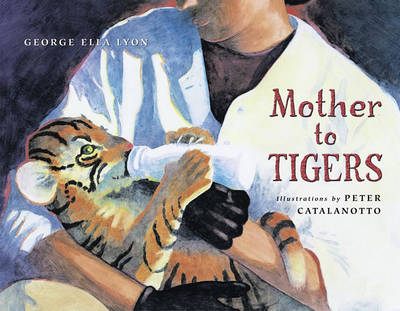 Reviews
Great for age 3-11 years
You are a Bengal tiger cub,
one of three -- Dacca, Rajpur, Raniganj -- abandoned by your mother.
You are so cold and thin that someone with kind hands puts you on a heating pad and sits by you for hours, moistening your mouth with milk.
When you give a weak cry and look up, there is a human face almost crying too.
Your new mother is Helen Delaney Martini, who has already raised a lion cub in her New York apartment. Tigers in the bathtub will be no problem for her and her husband, Fred.
This remarkable book -- strikingly striped as tigers are, sympathetically spoken as any child could wish -- tells the story of Helen Martini, founder of the Bronx Zoo's animal nursery in 1944 and its first woman zookeeper.

There are 32 pages in this book. This is a picture book. A picture book uses pictures and text to tell the story. The number of words varies from zero ('wordless') to around 1k over 32 pages. Picture books are typically aimed at young readers (age 3-6) but can also be aimed at older children (7+). This book was published 2003 by Simon & Schuster .