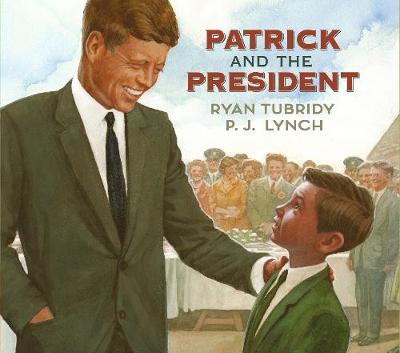 Patrick and the President

Reviews
Great for age 3-10 years
From foremost radio and television broadcaster Ryan Tubridy, and Kate Greenaway Medal-winner P. J. Lynch, comes a picture book about President John F. Kennedy's return to his ancestral home in Ireland. When the much-loved President visited Ireland in 1963, he described it as the best four days of his life and, for a generation of Irish people, it was a trip they never forgot. In this warmly told, big-hearted picture book, Ryan captures the fevered excitement in the build-up to JFK's visit - all evoked through the eyes of a young boy called Patrick who wants to know, more than anything, what it would feel like to shake the President's hand... Rooted in historical fact, and marking the centenary of JFK's birth, this feast of a book offers readers a very pure and personal take on JFK's visit to County Wexford and includes a timeline in the back matter.

This book has been graded for interest at 5-9 years.

There are 40 pages in this book. This is a picture book. A picture book uses pictures and text to tell the story. The number of words varies from zero ('wordless') to around 1k over 32 pages. Picture books are typically aimed at young readers (age 3-6) but can also be aimed at older children (7+). This book was published 2018 by Walker Books Ltd .

Ryan Tubridy has become one of Ireland's leading and best-loved media personalities. He is best recognized as the current host of the world's longest running chat show, The Late Late Toyshow. In 2017, he published his first picture book Patrick and the President, illustrated by P. J. Lynch, which was shortlisted for an Irish Book Award. He lives in Dublin. Find him on Instagram as @instatubridy. Chris Judge is an artist and illustrator who lives and works in Dublin, Ireland. His first picture book, The Lonely Beast, won the 2011 Irish Children's Book of the Year Award, and was followed by, The Brave Beast and The Snow Beast. He has also collaborated with comedian David O'Doherty on the Danger is Everywhere series. You can find Chris online at chrisjudge. com. P. J. Lynch is one of the most talented illustrators working today. He has won many awards, including the Mother Goose Award, the Irish Bisto Award (twice) and the Kate Greenaway Medal (twice). He lives in Dublin.