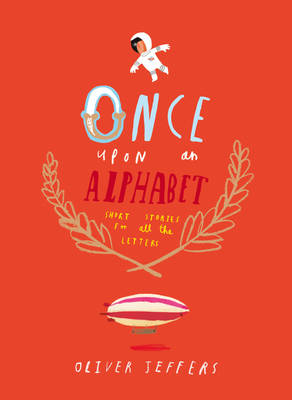 Once Upon an Alphabet

WINNER OF THE CBI BOOK OF THE YEAR
A flagship publication, gloriously bringing the alphabet to life in irresistible Oliver Jeffers style!

The letters of our alphabet work tirelessly to make words that in turn make stories, but what if there was a story FOR each of the letters instead? Turn the pages of this exquisite book to find out...

Here you will discover twenty-six short stories introducing a host of new characters (plus the occasional familiar face). From Edmund the astronaut with his awkward fear of heights, via the dynamic new investigative duo of the Owl and the Octopus, through to the Zeppelin that just might get Edmund a little bit closer to where he needs to be, this book is packed with funny, thrilling, perilous and above all entertaining tales inspired by every letter in the alphabet.

An adventure to follow from A to Z, or a treasure trove to dip in and out of, Once Upon an Alphabet is a work of exhilarating originality from artist Oliver Jeffers, the creator of much-loved modern classics such as Lost and Found and The Incredible Book Eating Boy.

This book has been graded for interest at 2+ years.

There are 112 pages in this book. This is a picture book. A picture book uses pictures and text to tell the story. The number of words varies from zero ('wordless') to around 1k over 32 pages. Picture books are typically aimed at young readers (age 3-6) but can also be aimed at older children (7+). This book was published 2014 by HarperCollins Publishers .

CBI Book of the Year Awards

Boston Globe
This book was recognised in the Horn Book Award - Picture Book category by the Boston Globe.