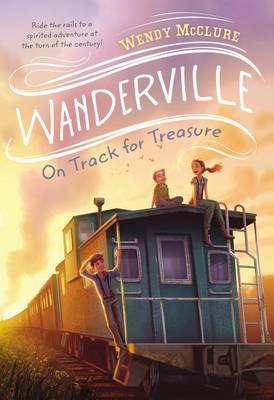 On Track For Treasure

Reviews
Great for age 8-12 years
Ride the rails to a spirited adventure at the turn of the century!

When the town sheriff discovers the exact location of "Wanderville," the orphans who live there--Jack, Frances, Harold, Alexander, and their new friends--must flee their home in the woods.

They take to the rails and, after nearly being caught, are rescued by a seemingly kind reverend and his wife. The pair brings the children to their home, telling them that if they help the sharecroppers who run their farm, they will eventually be adopted.

But Frances can't stop thinking about a mysterious treasure mentioned to her by a hobo they met during their travels, and when a young African-American sharecropper is blamed for stealing a fiddle her brother Harold actually nabbed, the citizens of Wanderville will have to decide whether their community is heading in the right direction or whether they need to get their "town" back on track.

This book is part of a book series called Wanderville Series .

There are 272 pages in this book. This book was published 2015 by Razorbill .

Nikki Loftin is a writer and native Texan who lives just outside Austin, Texas, with her two boys, two dogs, nine chickens, and one very patient husband. The Sinister Sweetness of Splendid Academy is her first novel.

Orphans And Foster Homes in fiction