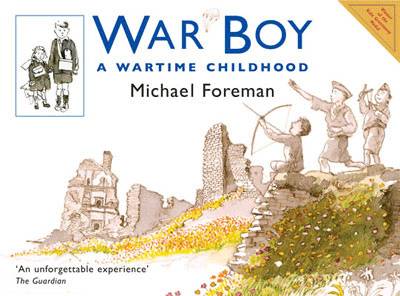 A special new edition of Michael Foreman's award-winning memoirs about his wartime childhood. 'I woke up when the bomb came through the roof. It came through at an angle, overflew my bed by inches, bounced up over my mother's bed, hit the mirror, dropped into the grate and exploded up the chimney.' The Second World War is an exciting time for a young boy growing up in a small town in Suffolk - sometimes far too exciting! Life during wartime is vividly brought to life in this personal story filled with childhood memories - from hiding in air-raid shelters to playing in the bombed-out ruins and the arrival of American soldiers. War Boy is a modern classic that combines a touching personal story with factual information and wonderful illustrations. Also available in paperback: War Boy (9781843650874), War Game (9781843650898), After the War Was Over (9781843650881), Farm Boy (9781843650904) and Billy the Kid (9781844583669).

There are 96 pages in this book. This book was published 2006 by Pavilion Books .

Michael Foreman has won the Kate Greenaway Medal twice. His books are published all over the world.