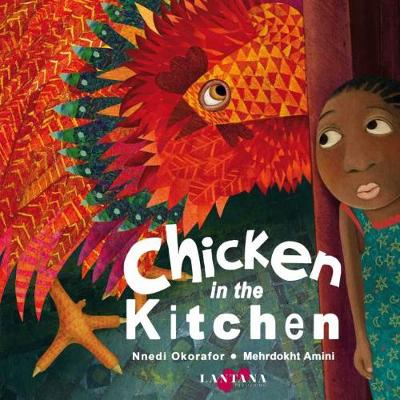 Chicken in the Kitchen

Reviews
Great for age 3-11 years
When Anyaugo follows a giant chicken into her kitchen one warm night in Nigeria, she embarks on a hilarious adventure where nothing is quite as It'seems...

There are 32 pages in this book. This is a picture book. A picture book uses pictures and text to tell the story. The number of words varies from zero ('wordless') to around 1k over 32 pages. Picture books are typically aimed at young readers (age 3-6) but can also be aimed at older children (7+). This book was published 2015 by Lantana Publishing .

Mehrdokht Amini has illustrated several books for children including Chicken in the Kitchen by Nnedi Okorafor, which won the 2016 Children's Africana Best Book Award, and Golden Domes and Silver Lanterns by Hena Khan. She has illustrated books published in Iran, Poland, Korea, Australia, the United Kingdom, and the United States. Mehrdokht grew up in Iran and now lives in Surrey, England. Visit her website at MyArt2C. com. Nnedi Okorafor is a multi-award-winning novelist of African-based sci fi, fantasy and magical realism. Born in the USA to Nigerian immigrant parents, Nnedi is a professor of creative writing and literature at the University of Buffalo. She is the winner of Hugo, Nebula and World Fantasy Awards, and the Wole Soyinka Prize for Literature in Africa.