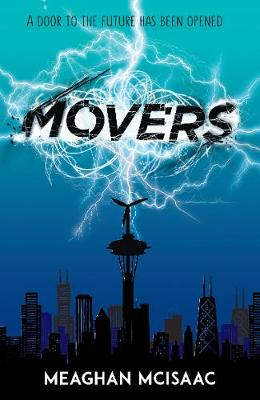 Reviews
Great for age 12-18 years
The world is dying, overcrowded and polluted. Storms rage over the immensely tall tower blocks, attracted to Movers. Movers are connected to people in the future, their Shadows. And moving your Shadow is highly illegal. Patrick knows all too well what happens if you break the law: his father has been in the Shelves ever since he moved his Shadow. And now Patrick and his family are in danger again. Following a catastrophic event at their school, Patrick must go on the run. Through filthy, teeming markets, forebrawler matches, a labyrinth of underground tunnels and beyond, he'll need his wits and courage to escape the forces that want to take everything he loves.

There are 288 pages in this book. This book was published 2016 by Andersen Press Ltd .

Meaghan McIsaac grew up as a scifi and fantasy nerd in Canada. Having spent her childhood writing stories and performing in her high school's musicals, she shipped off to the UK to complete an MA in Writing for Children. She returned to Toronto, where she lives now with her family and dogs, and writes books in her favourite genre.