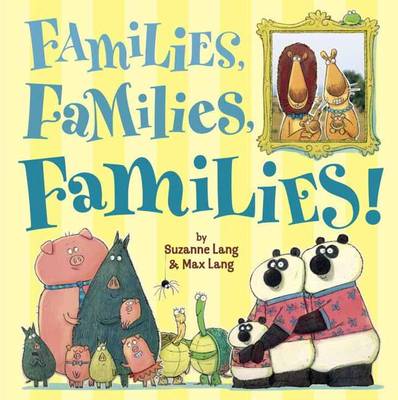 Reviews
Great for age 3-6 years
If you love each other, then you're a family . . . Do you have two dads? Or one step mum? Or what about the world's biggest grandpa? Discover a whole host of silly animal families in this hilarious celebration of the love found in families big and small. Max Lang's award-winning art style and Suzanne Lang's hilarious rhymes will tickle the tail feathers of readers big, small and everything in between.

There are 32 pages in this book. This is a picture book. A picture book uses pictures and text to tell the story. The number of words varies from zero ('wordless') to around 1k over 32 pages. Picture books are typically aimed at young readers (age 3-6) but can also be aimed at older children (7+). This book was published 2015 by Random House USA Inc .

Suzanne Lang (Author) Suzanne Lang produces, develops and writes for children's television. She is a producer for Nickelodeon international's animated-shorts program and previously worked for Cartoon Network. Suzanne loves animals (especially cats and monkeys) and chocolate (especially with praline filling. )Max Lang (Illustrator) Max Lang is an animation director, storyboard artist, character designer, and illustrator. He codirected the film adaptation of The Gruffalo, which was nominated for an Oscar and a BAFTA, as well as the Oscar-nominated adaptation of Room on the Broom, which has won numerous awards, including an International Emmy, a BAFTA, and the Cristal for Best TV Production. Suzanne and Max live in England with their daughter and a trouble-prone cat.