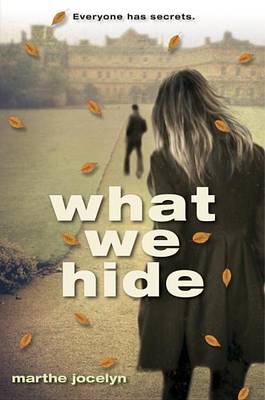 Reviews
Great for age 12-18 years
Americans Jenny and her brother, Tom, are off to England: Tom to university, to dodge the Vietnam draft, Jenny to be the new girl at a boarding school, Illington Hall. This is Jenny's chance to finally stand out, so accidentally, on purpose, she tells a lie. But in the small world of Ill Hall, everyone has something to hide. Jenny pretends she has a boyfriend. Robbie and Luke both pretend they don't. Brenda won't tell what happened with the school doctor. Nico wants to hide his mother's memoir. Percy keeps his famous dad a secret. Oona lies to everyone. Penelope lies only to herself.???Deftly told from multiple points of view in various narrative styles, including letters and movie screenplays, What We Hide is provocative, honest, often funny, and always intriguing.

This book was recognised in the YA category by the Young Adult Canadian Book Award.

There are 277 pages in this book. This book was published 2014 by Wendy Lamb Books .

Marthe Jocelyn is an award-winning author and illustrator who worked for many years as a toy designer before turning her hand to writing. She has written six novels, including the critically acclaimed works of historical fiction, "Mable Riley" and "Earthly Astonishments. " Jocelyn has also written a nonfiction account of the Foundling Hospital in London, England, entitled," A Home for Foundlings. " She has created eight picture books, one of which, "Hannah's Collections," was shortlisted for a Governor General's Literary Award for Illustration. Jocelyn has also edited two collections of short stories. Marthe Jocelyn divides her time between New York and Stratford, Ontario.

LGBT
Siblings in fiction
Love And Romance in fiction