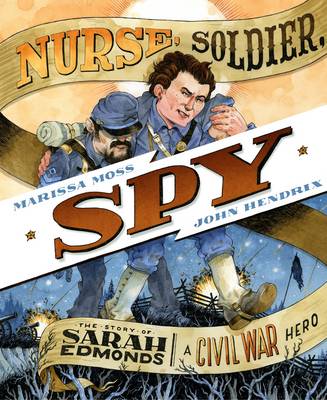 Reviews
Great for age 3-15 years
This fast-paced, high-energy picture book tells the true story of Sarah Emma Edmonds, who at age nineteen disguised herself as a man in order to fight in the Civil War. She took the name Frank Thompson and joined a Michigan army regiment to battle the Confederacy. Sarah excelled as a soldier and nurse on the battlefield. Because of her heroism, she was asked to become a spy. Her story comes to life through the signature illustrations and design of John Hendrix and the exciting storytelling of Marissa Moss.Praise for Nurse, Soldier, Spy"The incredible story of how Sarah Edmonds becomes Frank Thompson is full of adventure, bravado and pathos. Spirited pen-and-ink drawings, full of period detail and war action always focus on the intriguing Frank..." -San Francisco Chronicle"Readers won't stop until the last page of Marissa Moss' exciting Civil War story about Sarah Edmonds' life as a man in the Union Army. Vivid illustrations by artist John Hendrix match Moss' exciting account of Sarah's life in the Army." -Sacramento Bee "Hendrix's artwork is, as usual, a showstopper, and his bold caricatures convey Edmonds's strength and determination. Moss delivers a riveting narrative, making it clear that Edmonds was fighting for more than one kind of freedom." -Publishers Weekly, starred review "The focused view makes the book accessible for children. The pen-and-ink with acrylic wash illustrations are full of vibrant detail. Hendrix presents a meticulous view of military life, including army camp layouts and fortifications. Hand-drawn typography highlights important or humorous points in the text and adds even more visual interest." -School Library Journal "Hendrix's art emphasizes the horror and drama of war. Using hand-lettered text reminiscent of broadsides of the time, he visually shouts danger to the reader when tension is the highest." -Horn Book "In ink-and-wash illustrations, Hendrix again displays his knack for visual narrative. The aerial view of Edmonds approaching the Confederate camp is particularly effective. This large-format picture book illustrates Edmonds' courage and determination while conveying a good deal of information in a highly readable way." -Booklist "Admirable and enlightening. Moss is a lively prose writer, and Hendrix's illustrations inject humor into what is actually a serious subject." -The New York Times "Boldly illustrated. The text is full of interesting details. This book strikes a fine balance which conveys the horrors of the Civil War without portraying too much blood and violence for elementary readers. A very useful and researchable picture book." -Library Media Connection, starred review

There are 48 pages in this book. This is a picture book. A picture book uses pictures and text to tell the story. The number of words varies from zero ('wordless') to around 1k over 32 pages. Picture books are typically aimed at young readers (age 3-6) but can also be aimed at older children (7+). This book was published 2011 by Abrams .

Marissa Moss has written and illustrated many books for children, including the popular Amelia's Notebook series and The Pharaoh's Secret.