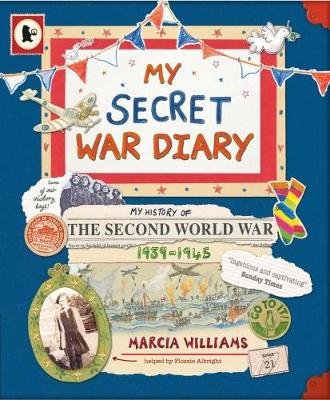 Reviews
Great for age 3-13 years
A fascinating diary account of the Second World War, as seen through the eyes of a young girl. Flossie is just nine years old when, in 1939, Britain declares war on Germany and her father leaves the family home to join the army. Flossie is left to bring up her baby brother and to face a whole host of new experiences on her own. Her diary becomes an outlet for relaying all the news from at home and abroad. From the first evacuees arriving to her sweetheart's being killed in Normandy in 1944, Flossie has to endure much hardship. But her own special blend of courage, humour and fighting spirit sees her through to the Armistice, when she can welcome her dad home at last.

There are 144 pages in this book. This is a picture book. A picture book uses pictures and text to tell the story. The number of words varies from zero ('wordless') to around 1k over 32 pages. Picture books are typically aimed at young readers (age 3-6) but can also be aimed at older children (7+). This book was published 2015 by Walker Books Ltd .

Marcia Williams is famous for her retellings of classic stories. From Shakespeare and Dickens to the Canterbury Tales and Greek Myths, her humorous comic-strip illustration is hugely popular all over the globe. She lives in London.