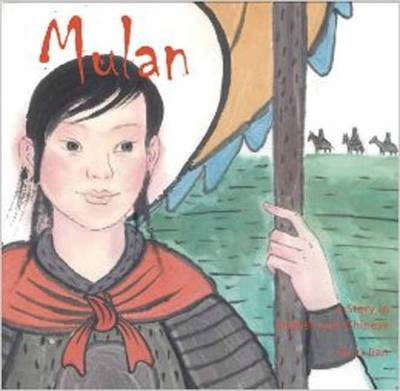 Mulan: A Story in Chinese and English

Reviews
Great for age 4-9 years
The legend of Mulan and her bravery is captured in this beautifully illustrated Chinese children's book. Mulan is a folk story from China's Northern Dynasty (439-589) about the unusual tale of an ordinary girl named Fa Mulan. This book is illustrated based on the original ballad, which depicts her bravery through Chinese ink paintings. A long time ago in China, there lived a young girl named Mulan. Her father was a retired general who taught her many skills girls weren't normally allowed to learn, like martial arts, archery, sword play and how to ride a horse. One day, soldiers came to Mulan's village. They told everyone China was in danger, and that a man from each family must join the army and fight. Mulan was terribly upset. Her father was too old, but was honor-bound to fight. If only she had been born a boy! That night, Mulan came up with a plan to save the honor of her family and her father's life. Early the next morning, disguised as a boy, Mulan took a horse and her father's armor before leaving to join the army. No one recognized her, and Mulan was very careful to never let anyone know she was really a girl. Mulan's bravery, courage and the skills she learned from her father helped her to succeed. Over twelve years, Mulan fought against the threat to China before finally helping to win the war. When she was offered a reward from the emperor for her incredible courage, Mulan instead asked for a horse so she could return home to her family. Mulan's family was so happy to see her! And there, for the first time in twelve years, Mulan exchanged her armor for a dress, fixed her hair into an elegant girl's hairstyle and joined her family, a beautiful young woman once again.

There are 42 pages in this book. This book was published 2014 by Shanghai Press .