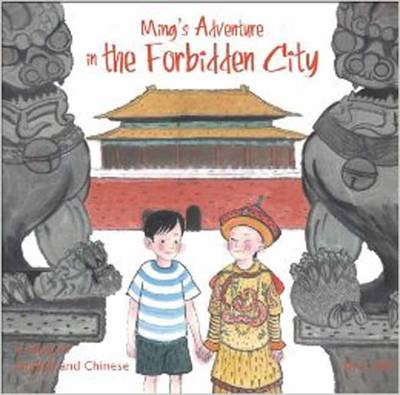 Ming's Adventure in the Forbidden City: A Story in English and Chinese

Reviews
Great for age 4-9 years
In this colorfully illustrated multicultural children's book a boy of today and a Little Emperor from the past find adventure and fun in the Forbidden City! On a visit to the Forbidden City, Xiao Ming somehow manages to lose his father. During his search, Ming finds a strange set of stairs. Perhaps his father went down them? Off he goes-down the stairs, across a strange pathway and through a hall where, rather than finding his father, Ming finds himself in the midst of the Qing Dynasty! The awed little boy is discovered by Imperial Bodyguards who take him to meet the Little Emperor. Ming described the airplanes and cars of the future and the Little Emperor shows Ming his treasures. The new friends are admiring a bronze dragon when suddenly the dragon comes to life and carries the Little Emperor and Ming up into the sky! The two boys and the dragon fly over the whole city, until Ming slips and falls from the dragon's tail into the city moat, bringing him back to the present-and his anxious father. A delightful tale of past meets present, Ming's Adventures in the Forbidden City will surely capture the imagination of children and parents alike.

This book has been graded for interest at 4-9 years.

There are 42 pages in this book. This book was published 2014 by Shanghai Press .