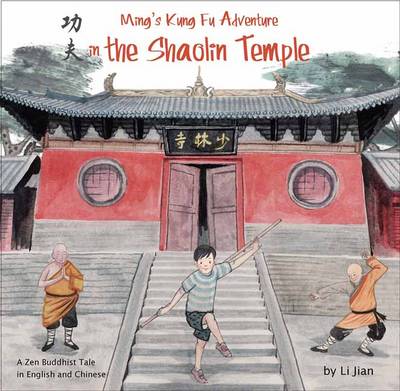 Ming's Kung Fu Adventure in the Shaolin Temple: A Zen Buddihist Tale in English and Chinese

After Xiao Ming participates in a martial arts exercise at school, his parents take him on a trip to the Shaolin Temple--the birth-place of kung fu--in the central Henan Province of China. The temple is situated in the forests of Shaoshi Mountain, one of the seven mountains of Song Mountains. With a history of over 1,500 years, the grand Shaolin Temple has precious stone-carvings in its many buildings. At the Warrior Monks School (Wuseng Yuan), he sees monks practicing kung fu and jumps in to learn some martial arts skills.

He then goes into a stone cave by mistake and meets a monk who turns out to be Bodhidharma, the founder of Zen Buddhism, according to legend. Bodhidharma takes him onto the mountain to see peach flowers, small birds and big trees. He tells Ming how the Shaolin Temple became the birthplace of Zen in Buddhism.

There are 42 pages in this book. This book was published 2015 by Shanghai Press .