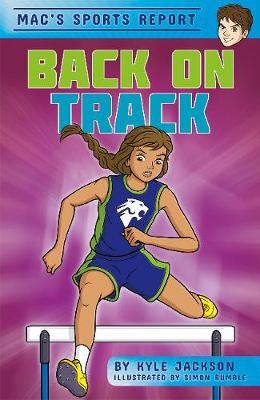 Mac's Sports Report: Back on Track

Reviews
Track and field season has arrived, and Mac is ready to report. Between last year's returning stars and standout newcomer Aleesha Ramos, the Predators are poised for an even better year at the state championships. That is, until practice ends, and meets begin. When the bleachers fill, Aleesha's sprinting is unremarkable. While the other sprinters warm up, Aleesha looks down. During races, she clips hurdles and loses speed. And afterward, she simply disappears. Mac is determined to find out why. Can Mac find out the cause behind the sprinter's poor performance? Or will the Predators lose their chance at a championship win? Stewart "Mac" McKenzie is THE sports expert at Coyote Canyon Middle School, and its best sports reporter. While he scores big on the court with his wheelchair basketball team, his love for all sports is equally epic. There isn't a stat he doesn't know, a player's name he doesn't recognize, a big game he hasn't seen.

There are 128 pages in this book. This book was published 2018 by Jolly Fish Press .