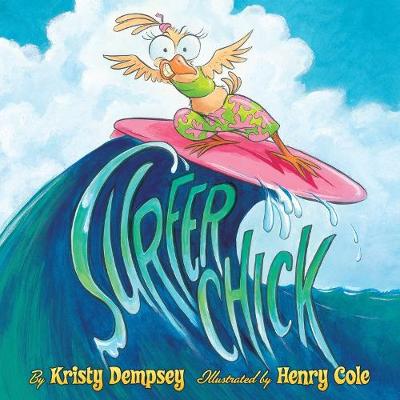 Reviews
Great for age 3-6 years
"Two birds of a feather, a chick and her dad, lived by the shore, in a radical pad. A legend in surfing, Chick's dad ruled the Roost. Chick's dream was to learn every move he produced."So begins the story of a little chick and her dad who take to the beach so she can finally learn how to surf. At first Chick's mood is foul as she struggles through some gnarly waters, but soon she is catching waves on her own board and even doing righteous tricks, just like her rad dad!Filled with cool surf lingo, this sweet rhyming picture book is perfect for summer at the beach and for celebrating the love between a father and a daughter.Praise for Surfer ChickSTARRED REVIEWS"A most expressive chicken makes a splash in this winning title about learning to surf. Dempsey keeps her groovy, rhyming text tight to create a raplike beat that colorfully describes a young chick's adventures tackling the waves. A guaranteed `Cowabunga!'"-Kirkus Reviews, starred review"This is a sweet, spunky story about perseverance and gaining confidence. Acrylic paint and colored pencil with a hot press watercolor make the sunsets dynamic and bright. Totally awesome!"-School Library Journal, starred review"Rollicking, righteous fun."-People magazineAWARD:HONORS winner: 2012 National Parenting Publications Book Awards

There are 32 pages in this book. This is a picture book. A picture book uses pictures and text to tell the story. The number of words varies from zero ('wordless') to around 1k over 32 pages. Picture books are typically aimed at young readers (age 3-6) but can also be aimed at older children (7+). This book was published 2012 by Abrams .

Kristy Dempsey is the author of Me with You. She lives in Brazil. Henry Cole is the New York Times bestselling illustrator of numerous picture books for children, including Chicken Butt!