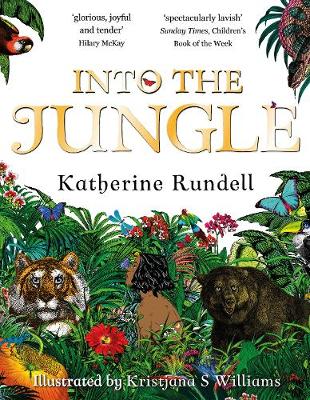 Into the Jungle is a modern classic in the making, as Katherine Rundell creates charming and compelling origin stories for all Kipling's best-loved characters, from Baloo and Shere Khan to Kaa and Bagheera. As Mowgli travels through the Indian jungle, this brilliantly visual tale, which weaves each short story together into a wider whole, will make readers both laugh and cry.

Rudyard Kipling's The Jungle Book, first published by Macmillan in 1894, is one of the most enduring books of children's literature, delighting generations of children. Katherine Rundell has taken this as the basis of her new and enchanting tale, sharing the early years of favourite characters and informing the creatures they become in Kipling's classic, with stories about family and friendship, loyalty and jungle law, and a final battle which will decide the future of the forest.

A gorgeously produced paperback with a foiled cover and colour illustrations throughout by creative genius Kristjana S Williams, this is truly a book for all the family to treasure and share.

There are 240 pages in this book. This is a short story book. This book was published 2019 by Pan Macmillan .

Kristjana S Williams is an Icelandic artist who studied graphic design and illustration at Central St Martins. She has worked as a Creative Director, but now creates fine art pieces, art prints, furniture and more with her own studio. Her work is renowned throughout the industry and she has won numerous awards including a D&AD award, Clio Award and a first prize at New York Festivals Grand Prix. She has previously illustrated The Wonder Garden for Wide Eyed Editions. Katherine Rundell was born in 1987 and grew up in Africa and Europe. In 2008 she was elected a Fellow of All Souls College, Oxford. Her first book, The Girl Savage, was born of her love of Zimbabwe and her own childhood there; her second, Rooftoppers, was inspired by summers working in Paris and by night-time trespassing on the rooftops of Oxford colleges. She is currently working on her doctorate alongisde an adult novel.