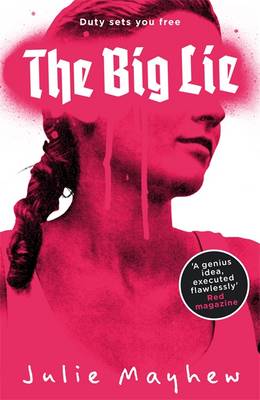 Reviews
Great for age 12-18 years
Shortlisted for the Peters Book of the Year.A shocking story of rebellion and revelation set in a contemporary Nazi England.Jessika Keller is a good girl: she obeys her father, does her best to impress Herr Fisher at the Bund Deutscher Madel meetings and is set to be a world champion ice skater. Her neighbour Clementine is not so submissive. Outspoken and radical, Clem is delectably dangerous and rebellious. And the regime has noticed. Jess cannot keep both her perfect life and her dearest friend. But which can she live without?THE BIG LIE is a thought-provoking and beautifully told story that explores ideas of loyalty, sexuality and protest.

This book has been graded for interest at 16+ years.

Julie Mayhew is the author of Red Ink (shortlisted for the 2014 Branford Boase Award), The Big Lie (winner of the 2016 Sidewise Award for Alternate History) and the critically acclaimed Mother Tongue. She also writes for the stage and for film, and has been twice nominated for Best Original Drama at the BBC Audio Drama Awards for her radio plays -including a 2016 recognition for the The Electrical Venus, the drama on which this book is based. Julie grew up in Peterborough and originally trained as a journalist, then as an actress, before turning to writing because she couldn't find enough brilliant roles for girls. www. juliemayhew. co. uk Twitter: @juliemayhew Instagram: JulieMayhew