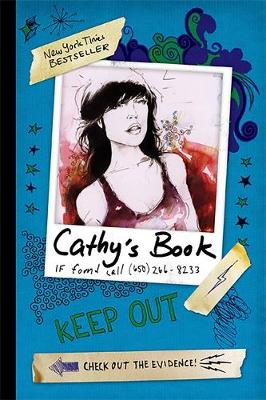 Reviews
Great for age 12-18 years
The publishing phenomenon Cathy's Book redefined the way teens approach novels and set a new standard for interactivity, using the most popular kids' technology to enhance the experience of reading a really good story. As a new chapter is about to unfold with the publication of the sequel, Cathy's Key later this spring, the original novel is available in trade paperback. All of the supplementary items from the evidence pack" are reproduced on pages in the back of the book, making this edition more accessible and portable. All of the original websites, phone numbers, and secret codes are still operational. Part romance, part thriller, part mystery, Cathy's Book stands on its own beyond the interactive angle and the intense marketing campaign that made it a bestseller. Readers identify with Cathy, they read her story, listen to her phone messages, check out the websites she mentions, and they leave her messages on her MySpace.com page and on a special voicemail. Fans have even created their own videos on YouTube, demonstrating their comfort and familiarity with this level of interactivity and technology. Reviewers and awards committees have also recognized the unique phenomenon that reset the bar for engaging teen novels. Don't miss this opportunity to get caught up in Cathy's world all over again! Included in the paperback edition only is a special, teaser chapter from the sequel (which pubs two months later), to whet the appetite of the thousands of readers who have gotten caught up in the web of Cathy's story! A YALSA Quick Pick

Sean Stewart is the author of eight science fiction novels and won the World Fantasy Award in 2000. Jordan Weisman is a leader in ARG and computer gaming, having created the successful MechWarrior franchise of PC games. He has founded three major design companies (FASA, WizKids and, with Stewart, 4orty2wo Entertainment) and is Creative Director for Microsoft entertainment division. Sean Stewart is both an award-winning novelist and a pioneer in interactive and multimedia fiction. In 2001 he won the World Fantasy Award for his novel Galveston, and acted as lead writer and co-designer of"The Beast," which Internet Life called"the Citizen Kane of online entertainment. " He lives in Davis, CA.