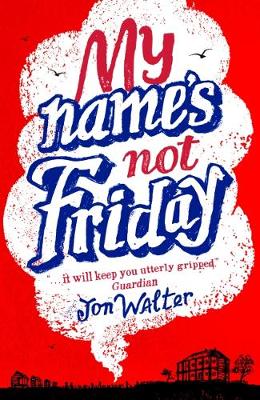 My Name's Not Friday

Reviews
Great for age 12-18 years
Samuel's an educated boy. Been taught by a priest. He was never supposed to be a slave. He's a good boy too, thoughtful and kind. The type of boy who'd take the blame for something he didn't do, if it meant he could save his brother. So now they don't call him Samuel anymore. And the sound of guns is getting ever closer . . . Jon Walter's second novel is a beautiful and moving story about the power of belief and the strength of the human spirit, set against the terrifying backdrop of the American Civil War.

There are 368 pages in this book. This book was published 2016 by David Fickling Books .

Jon Walter is a former photo journalist and the author of the highly-acclaimed Close to the Wind. He lives with his family near Brighton, East Sussex.

Carnegie Award
Telegraph Best YA Books: 2015
Boy And Man in fiction
Prejudice And Racism in fiction