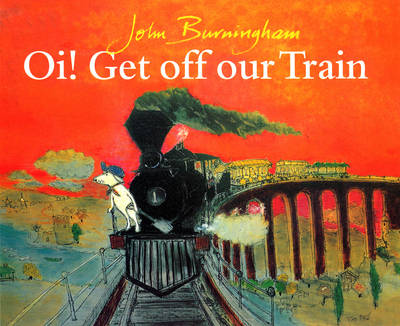 Oi! Get Off Our Train

Reviews
Great for age 3-6 years
A tale of a little boy speeding through the night on his dream-train to far off lands where endangered animals beg for a lift.

There are 48 pages in this book. This is a picture book. A picture book uses pictures and text to tell the story. The number of words varies from zero ('wordless') to around 1k over 32 pages. Picture books are typically aimed at young readers (age 3-6) but can also be aimed at older children (7+). This book was published 1991 by Random House Children's Publishers UK .

John Burningham (1936-2019) studied illustration and graphic design at the Central School of Art, graduating with distinction in 1959. Many illustration commissions followed including iconic posters for London Transport, before the publication of Borka: the Adventures of a Goose with No Feathers, Johns first book for children (Cape, 1963) which won the prestigious Kate Greenaway Medal for illustration and heralded the beginning of an extraordinary career. John Burningham has since written and illustrated over thirty picture books, that have been translated and distributed all over the world. These feature his classic and much loved childrens books including Chitty Chitty Bang Bang, by Ian Fleming (Jonathan Cape, 1964); Mr Gumpys Outing (Jonathan Cape, 1970) also awarded the Kate Greenaway Medal; Around the World in Eighty Days by Jules Verne (Jonathan Cape, 1972); The Shopping Basket (Random House, 1980); The Wind in the Willows by Kenneth Grahame (Penguin/Puffin, 1983); Granpa (Jonathan Cape, 1984) later made into an animated film and Oi! Get off our Train (Jonathan Cape, 1989) and various books for adults England (Jonathan Cape, 1992); France (Jonathan Cape, 1998); The Time of Your Life (Bloomsbury Publishing, 2002) and When We Were Young (Bloomsbury Publishing, 2004). Tug of War was republished in 2012, and a special edition of Borka, celebrating 50 years in print, was published in June 2013. Picnic appeared in the autumn of 2013 and The Way to the Zoo was published in the UK in 2014. Chitty Chitty Bang Bang is celebrating its 50th year in print with a limited edition in hardback to be published in 2015.