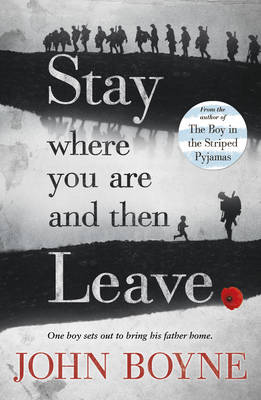 Stay Where You Are And Then Leave

Reviews
Great for age 7-18 years
The day the First World War broke out, Alfie Summerfield's father promised he wouldn't go away to fight - but he broke that promise the following day. Four years later, Alfie doesn't know where his father might be, other than that he's away on a special, secret mission. Then, while shining shoes at King's Cross Station, Alfie unexpectedly sees his father's name - on a sheaf of papers belonging to a military doctor. Bewildered and confused, Alfie realises his father is in a hospital close by - a hospital treating soldiers with an unusual condition. Alfie is determined to rescue his father from this strange, unnerving place . . .

There are 288 pages in this book. This book was published 2014 by Random House Children's Publishers UK .

THE BOY IN THE STRIPED PYJAMAS is John Boyne's first book for children. He is 33 years old, lives in Dublin and is a full-time writer. He was writer-in-residence at the University of East Anglia on the MA in Creative Writing course and spent many years working as a bookseller.