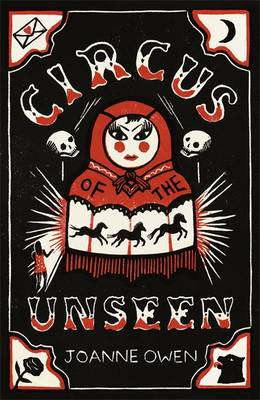 Circus of the Unseen

Reviews
Great for age 12-18 years
Staying alive isn't easy in the world of the deadAfter an accident at her grandmother's house, Rosie is transported to a strange and sinister world populated by a cast of carnivalesque characters who reside in the Circus of the Unseen. Reigning over them is an old woman called Mother Matushka, who guards the threshold between life and death and has extraordinary powers over all around her. This is an in-between world, a bizarre and trapped existence, but Rosie is not like the others here. She seems to be hovering between the world of the living and the world of the dead, and even seems to have the power to challenge Mother Matushka. Can Rosie escape Mother Matushka's formidable rule and a world in limbo? And can she solve another mystery - one that lies at the heart of her grandmother's life?

This book has been graded for interest at 13-15 years.

Joanne Owen was born in Pembrokeshire, Wales, and read Social and Political Sciences with Archaeology and Anthropology at St John's College, Cambridge. She has worked in children's bookselling and publishing ever since. Joanne lives in north London with her partner.