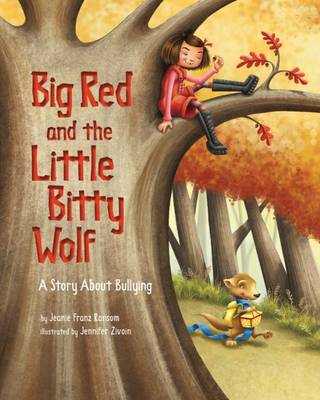 Big Red and the Little Bitty Wolf: A Story About Bullying

Reviews
Great for age 3-6 years
Big Red and the Little Bitty Wolf is a picture book story about a small wolf who encounters a big problem on the way to school. Big Red Riding Hood has just moved into the neighborhood and she loves nothing more than tormenting the Little Bitty Wolf. He feels helpless and hopeless - nothing seems to make Big Red stop bothering him. He tries ignoring her, telling her to stop, and puffing himself up to look bigger, but it takes something unexpected to make Big Red stop.

Big Red and the Little Bitty Wolf, a modern twist on the classic tale in which a little wolf's unexpected solution to the class bully is met with surprising success. The book talks about bullying, and what to do / how to find help (school counselor) should you need to.

There are 32 pages in this book. This is a picture book. A picture book uses pictures and text to tell the story. The number of words varies from zero ('wordless') to around 1k over 32 pages. Picture books are typically aimed at young readers (age 3-6) but can also be aimed at older children (7+). This book was published 2016 by American Psychological Association .

Jeanie Franz Ransom is a licensed professional counselor whose books include Big Red and Little Bitty Wolf, Don't Squeal Unless It's a Big Deal, I Don't Want to Talk About it and What Really Happened to Humpty? She's also worked as an elementary school counselor, where she was never without her popular puppet, Mr. Know-It-Owl. Jeanie and her husband are parents to three grown boys and two dogs, and divide their time between St Louis, MO and Northport, MI. Jennifer Zivoin has always loved art and storytelling, so becoming an illustrator was a natural career path. She has been trained in media ranging from figure drawing to virtual reality, and earned her bachelor of arts degree with highest distinction from the honors division of Indiana University. During her professional career, Jennifer worked as a graphic designer and then as a creative director before finding her artistic niche illustrating children's books.