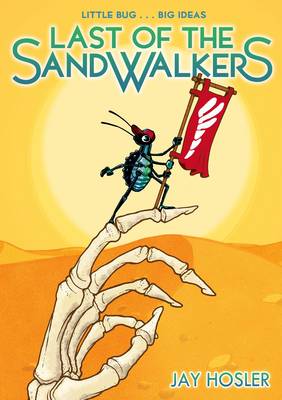 Reviews
Great for age 3-18 years
In the tradition of Watership Down - an intrepid beetle discovers a whole world beyond her desert home in this bug's-eye adventure! Nestled in the grass under the big palm tree by the edge of the desert there is an entire civilization - a civilization of beetles. In this bug's paradise, beetles write books, run restaurants, and even do scientific research. One such scientist is Lucy, who leads a team of researchers out into the desert. Their mission is to discover something about the greater world...but what lies in wait for them is going to change everything Lucy thought she knew. Beetles are not the only living creatures in the world.

There are 304 pages in this book. This is a picture book. A picture book uses pictures and text to tell the story. The number of words varies from zero ('wordless') to around 1k over 32 pages. Picture books are typically aimed at young readers (age 3-6) but can also be aimed at older children (7+). This book was published 2015 by Roaring Brook Press .

Jay Hosler is a biology professor at Juniata College, and a cartoonist. He enjoys telling stories about science and the natural world, and his first graphic novel ("Clan Apis") won a Xeric Award and was selected for YALSA's "2002 Popular Paperbacks for Young Adults. " His book "Evolution: The Story of Life on Earth," was a 2011 Junior Library Guild selection, a nominee for YALSA's 2012 "Great Graphic Novels for Teens," and has been included in the Texas Library Association's "Maverick Graphic Novel Reading List. " He lives in central Pennsylvania with his wife and his two little nerdlings.