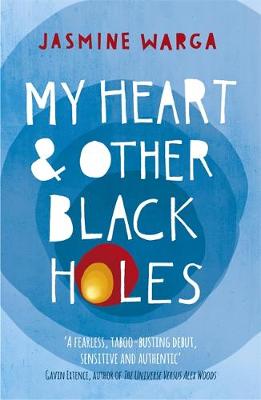 My Heart and Other Black Holes

A brilliant and heartbreaking novel perfect for fans of Thirteen Reasons Why.

Aysel and Roman are practically strangers, but they've been drawn into an unthinkable partnership. In a month's time, they plan to commit suicide - together.

Aysel knows why she wants to die: being the daughter of a murderer doesn't equal normal, well-adjusted teenager. But she can't figure out why handsome, popular Roman wants to end it all....and why he's even more determined than she is.

With the deadline getting closer, something starts to grow between Aysel and Roman - a feeling she never thought she would experience. It seems there might be something to live for, after all - but is Aysel in so deep she can't turn back?

Jasmine Warga lives in Mariemont, Ohio with her husband, Greg, a cat named Salvador Dali, and a puppy named Scout. She was born and raised just outside of Cincinnati, and spent her days making up stories, listening to emotive music, staring up at the night sky, and reading. She graduated from Northwestern University with a B. A. in History and Art History, and went on to teach 6th grade science at a school in Houston, Texas. In June 2013, she received a Master's in Fine Arts in Creative Writing from Lesley University. My Heart and Other Black Holes is her first novel.