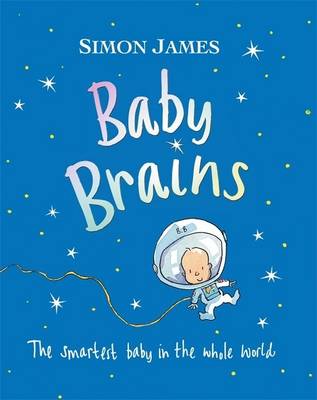 Reviews
Great for age 3-11 years
Meet the extraordinary Baby Brains. He reads the paper, mends the car and works as a doctor at the hospital. He's so clever that some scientists ask him to go on their next space mission. And that's when Baby Brains shows that in one way at least he's like every other baby in the world: he wants his mummy.

This book was recognised in the Books for Younger Children category by the Red House Children's Book Award.

This book is part of a book series called Baby Brains .

This is a picture book. A picture book uses pictures and text to tell the story. The number of words varies from zero ('wordless') to around 1k over 32 pages. Picture books are typically aimed at young readers (age 3-6) but can also be aimed at older children (7+). This book was published 2009 by Walker Books Ltd .

Simon James is the author and illustrator of a number of best-selling picture books. These include Dear Greenpeace and Leon and Bob, which was a Smarties Book Prize Silver Medal Winner and Little One Step.