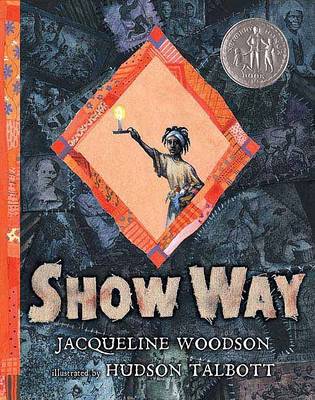 Winner of a Newbery Honor!

Soonie's great-grandma was just seven years old when she was sold to a big plantation without her ma and pa, and with only some fabric and needles to call her own. She pieced together bright patches with names like North Star and Crossroads, patches with secret meanings made into quilts called Show Ways -- maps for slaves to follow to freedom. When she grew up and had a little girl, she passed on this knowledge. And generations later, Soonie -- who was born free -- taught her own daughter how to sew beautiful quilts to be sold at market and how to read.

From slavery to freedom, through segregation, freedom marches and the fight for literacy, the tradition they called Show Way has been passed down by the women in Jacqueline Woodson's family as a way to remember the past and celebrate the possibilities of the future. Beautifully rendered in Hudson Talbott's luminous art, this moving, lyrical account pays tribute to women whose strength and knowledge illuminate their daughters' lives.

There are 48 pages in this book. This is a picture book. A picture book uses pictures and text to tell the story. The number of words varies from zero ('wordless') to around 1k over 32 pages. Picture books are typically aimed at young readers (age 3-6) but can also be aimed at older children (7+). This book was published 2019 by Putnam Publishing Group, U. S. .

Jacqueline Woodson was born in Ohio and grew up in South Carolina. She has written several books for teenagers and recently won the Coretta Scott King Award which honours African-American writers of outstanding books for children. She has received two American Library Association Awards, and the Kenyon Review Award for Literary Excellence in Fiction for Autobiography Of A Family Photo, published by Penguin US. Jacqueline now lives in Brooklyn, New York.