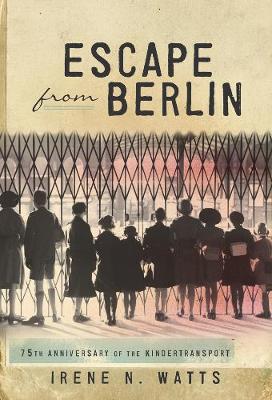 Reviews
Great for age 8-13 years
Escape from Berlin combines Irene N. Watts' three award-winning, bestselling novels: Goodbye Marianne, Remember Me and Finding Sophie. The trilogy follows the life of Marianne, a young Jewish girl growing up in Nazi Germany who was rescued and taken to England by the Kindertransport. In Goodbye Marianne, 11-year-old Marianne and her family are targeted by the Nazi regime. In Remember Me, young Marianne is adjusting to life in England. In Finding Sophie, Marianne and Sophie are reunited after being separated since their arrival in Britain.

There are 424 pages in this book. This book was published 2013 by Tundra Books .

Irene Watts was born in Berlin and at the age of seven was taken to Britain, along with hundreds of other Jewish children escaping from German oppression. She now lives in Canada where she has a career as a writer and playwright.