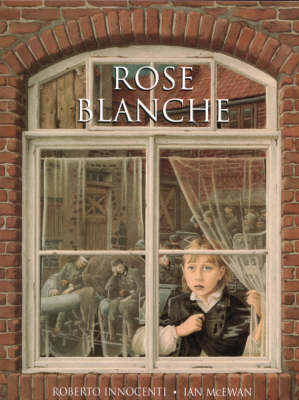 Reviews
Great for age 3-6 years
Rose Blanche was the name of a group of young German citizens who, at their peril, protested against the war. Like them, Rose observes all the changes going on around her which others choose to ignore. She watches as the streets of her small German town fill with soldiers. One day she sees a little boy escaping from the back of a truck, only to be captured by the mayor and shoved back into it. Rose follows the truck to a desolate place out of town, where she discovers many other children, staring hungrily from behind an electric barbed wire fence. She starts bringing the children food, instinctively sensing the need for secrecy, even with her mother. Until the tide of the war turns and soldiers in different uniforms stream in from the East, and Rose and the imprisoned children disappear for ever . . .

There are 32 pages in this book. This is a picture book. A picture book uses pictures and text to tell the story. The number of words varies from zero ('wordless') to around 1k over 32 pages. Picture books are typically aimed at young readers (age 3-6) but can also be aimed at older children (7+). This book was published 2004 by Random House Children's Publishers UK .

Ian McEwan is the critically acclaimed author of seventeen books. His first published work, a collection of short stories, First Love, Last Rites, won the Somerset Maugham Award. His novels include The Child in Time, which won the 1987 Whitbread Novel of the Year Award; The Cement Garden; Enduring Love; Amsterdam, which won the 1998 Booker Prize; Atonement; Saturday; On Chesil Beach; Solar; Sweet Tooth; The Children Act; and Nutshell, which was a Number One bestseller. Atonement and Enduring Love have both been turned into award-winning films, The Children Act and On Chesil Beach are in production and set for release this year, and filming is currently underway for a BBC TV adaptation of The Child in Time. Ruth Vander Zee (Author) Ruth was brought up in Chicago. At the age of forty, she decided to get her college degree in education and later began writing stories for children. Ruth and her husband Vern live in Miami, Florida. Roberto Innocenti (Illustrator) Roberto Innocenti was born in 1940 in Bagno a Ripoli, a small town near Florence. Never having attended art school, he went to Rome to work in an animation studio. Returning to Florence, he began designing books and illustrating film and theatre posters. He has illustrated Pinocchio, A Christmas Carol, J. Patrick Lewis's The Last Resort and Ruth Vander Zee's Erika's Story. He lives in Florence with his wife.