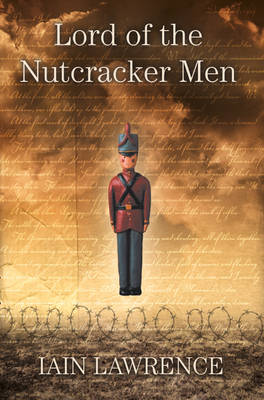 Lord of the Nutcracker Men

A young boy gradually comes to understand the difference between his toy soldiers and the bloodshed of the First World War in this poignant story.

Ten-year-old Johnny loves the army of nutcracker soldiers his toymaker father whittles for him. Johnny eagerly plays at war, demolishing imaginary foes. But in 1914, war with Germany looms, and all too soon Johnny's father is swept up in the war to end all wars as he proudly enlists to fight at the front in France. Johnny believes his father will be back in a few months, in time to celebrate Christmas with him and his mum. But the war is nothing like any soldier or person at home expected. It is brutal and horrific.

The letters that arrive from Johnny's dad reveal the ugly realities of combat - and the soldiers he carves and encloses begin to bear its scars. Still, Johnny adds these soldiers to his armies of Huns, Tommies, and Frenchmen, engaging them in furious battle out in the muddy garden. His war games bind him to the father he longs to see again. But when these games seem to foretell his dad's real battles, Johnny thinks he possesses godlike powers over his wooden men. He fears he controls his father's fate, the lives of all the soldiers in no-man's-land, and the outcome of the war itself.

In this haunting and poignant tale, Iain Lawrence explores the irrationality of war and its effect on lives that are all too fragile.

There are 272 pages in this book. This book was published 2002 by HarperCollins Publishers .

Iain Lawrence was born in Sault Ste. Marie, Ontario, the second of four children. He studied journalism in Vancouver and went to work for the Prince Rupert Daily News. Eighteen years later, he went to work on a fish farm before he started writing full-time. He learned to sail at the age of nine, and as he grew up, boating became a huge part of his life. He lives with his long-time partner Kristin and dog Skipper on a remote radio-transmission site on an island off Prince Rupert, British Columbia.