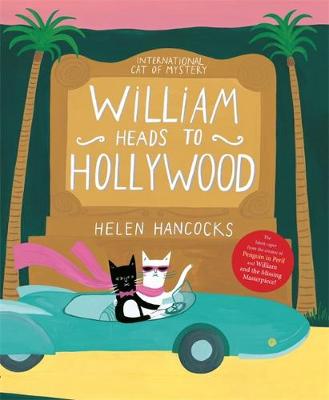 Reviews
Great for age 3-8 years
A glorious sequel to William and the Missing Masterpiece! Someone has stolen the Gold Cuckoo Awards from the famous Cuckoo film studios, and only William is debonair enough to schmooze the stars and learn who the culprit is. But every cat has his own feline fatale to contend with, and our hero is no exception... Mischief, glamour and romance await in William Heads to Hollywood!

There are 32 pages in this book. This is a picture book. A picture book uses pictures and text to tell the story. The number of words varies from zero ('wordless') to around 1k over 32 pages. Picture books are typically aimed at young readers (age 3-6) but can also be aimed at older children (7+). This book was published 2015 by Templar Publishing .

HELEN HANCOCKS is the best-selling author/illustrator of three picture books to date: William and the Missing Masterpiece, William Heads to Hollywood, and Penguin in Peril. She lives and works in the UK.