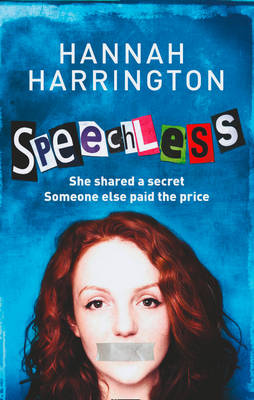 EVERYONE KNOWS THAT CHELSEA KNOT CAN'T KEEP A SECRET

Until now. Because the last secret she shared turned her into a social outcast-and nearly got someone killed. Now Chelsea has taken a vow of silence-to learn to keep her mouth shut, and to stop hurting anyone else. And if she thinks keeping secrets is hard, not speaking up when she's ignored, ridiculed, and even attacked is worse.

But there's strength in silence, and in the new friends who are, shockingly, coming her way. People she never noticed before. A boy she might even fall for. If only her new friends can forgive what she's done. If only she can forgive herself.

"Saving June is an incredible debut." Stephanie Kuehnert, author of Ballads of Suburbia

"...tender, funny, and moving..." -Courtney Summers, author of Cracked Up to Be

"...a fresh, fun and poignant book..." -Kody Keplinger, author of The DUFF

There are 272 pages in this book. This book was published 2013 by HarperCollins Publishers .

Hannah Harrington resides in Michigan with one dog and too many cats. When she isn't busy writing like a crazy person, she enjoys arguing about politics, watching documentaries, playing guitar (very badly), and speaking about herself in the third person. You can find her online at hannahharrington. blogspot. com, facebook. com/hannahharrington and on Twitter @hharrington_.