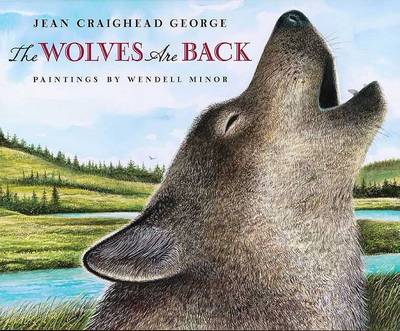 The Wolves Are Back

There are 32 pages in this book. This book was published 2012 by Penguin Putnam Inc .

Jean Craighead George wrote over one hundred books for children and young adults. Her novel Julie of the Wolves won the Newbery Medal in 1973, and she received a 1960 Newbery Honor for My Side of the Mountain. She continued to write acclaimed picture books that celebrate the natural world. Her other books with Wendell Minor include The Wolves Are Back; Luck; Everglades; Arctic Son; Morning, Noon, and Night; and Galapagos George. Wendell Minor has illustrated numerous award-winning picture books, including Reaching for the Moon by Buzz Aldrin, Galapagos George by Jean Craighead George, and If You Were a Panda Bear by his wife, Florence Minor. Mr. Minor's art has been exhibited at the Norman Rockwell Museum, among other prestigious institutions throughout the country. He lives in rural Connecticut with Florence and their two cats. Wendell Minor is the illustrator of many award-winning picture books for children, including Robert Burleigh's Abraham Lincoln Comes Home , If You Spend a Day with Thoreau at Walden Pond and Edward Hopper Paints His World , as well as the New York Times-bestselling Reaching for the Moon by Buzz Aldrin. He lives in Washington, Connecticut.