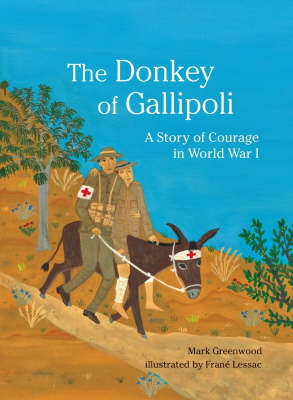 Reviews
Two unlikely heroes rescue hundreds of men wounded in war in a poignant picture book based on a true tale of World War I.When Jack Simpson was a boy in England, he loved leading donkeys along the beach for a penny a ride. So when he enlists as a stretcher bearer in World War I, his gentle way with those animals soon leads him to his calling. Braving bullets and bombs on the battlefields of Gallipoli, Jack brings a donkey to the aid of 300 Allied soldiers earning both man and donkey a beloved spot in legend. This engaging nonfiction tale includes a map and brief bios of key characters.

Mark Greenwood's award-winning books examining history, myths and legends have been honoured in Australia and internationally. Simpson and His Donkey was a CBCA Honour Book. Jandamarra, illustrated by Terry Denton, was shortlisted for the CBCA Eve Pownall and the NSW Premier's Literary Awards. Mark often teams with his wife, illustrator Frane Lessac, to produce books that promote history as well as an understanding of multicultural issues. Terry Denton is one of Australia's busiest literary creative forces and his work as a writer and illustrator can be found in popular children's titles such as the Gasp! books, Terry Denton's Bumper Books and the Wombat and Fox stories. His work with writer Andy Griffiths on the Just! books and the epic Treehouse series is universally loved. Frane Lessac is an artist and author of international renown having exhibited in London, Paris, New York, Los Angeles and the Caribbean. Her numerous children's books have been translated into a variety of languages. Frane was born in the United States but now lives in Australia.