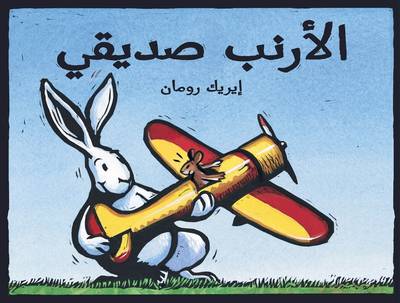 Reviews
Great for age 3-6 years
When Mouse lets his best friend Rabbit play with his brand-new airplane, trouble is not far behind. Of course, Rabbit has a solution, but when he sets out to solve a problem, even bigger problems follow.

There are 32 pages in this book. This is a picture book. A picture book uses pictures and text to tell the story. The number of words varies from zero ('wordless') to around 1k over 32 pages. Picture books are typically aimed at young readers (age 3-6) but can also be aimed at older children (7+). This book was published 2012 by Bloomsbury Qatar Foundation Publishing .

Eric Rohmann has created and illustrated many picture books. He received a Caldecott Honor for Time Flies , and the Caldecott Medal for My Friend Rabbit , which has published by Roaring Brook Press. Simon French began his writing career as a thirteen-year-old in Sydney's western suburbs, and had his first novel published five years later while still at high school. In the years since, his writing for children has been published in numerous overseas editions, and in Australia has earned critical acclaim and several awards, including the 1987 Children's Book Council of Australia's Book of the Year award for All We Know. Simon works as a teacher in a small school in Sydney's rural outskirts. Tranlsated from the English by Ghada Mohamed Mahmoud